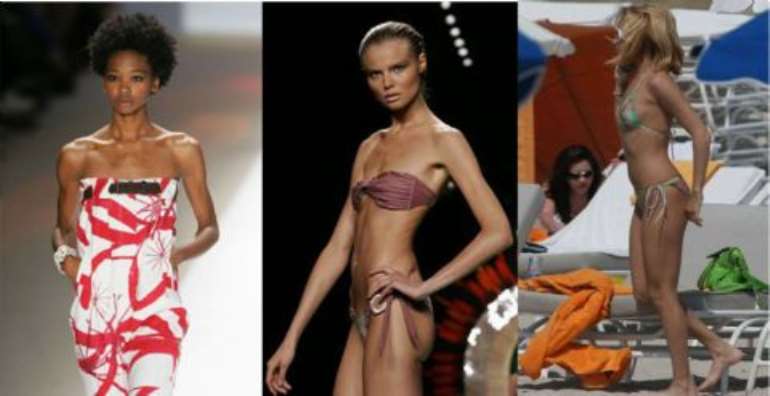 Pressure was mounting today for a catwalk ban on super-skinny models.

On the eve of London Fashion Week the growing trend for "size-zero" models in the fashion industry is causing grave concern.

Experts say legislation is now needed to protect the health of the models and of the teenage girls and young women who are influenced by them.

They are urging London to follow the lead taken by Madrid — and likely to be adopted by Milan — of banning models below a certain size from the catwalks.

Under any ban, super-thin models such as Lily Cole would be barred. London Fashion Week, which begins next week, has so far refused to follow suit.

The new Spanish rules say models with a body mass index — a ratio of height to weight — below 18 are not allowed to appear at its shows.

A BMI of 18.5 or below is currently classed as under-weight by the World Health Organisation. A model who is 5ft 9in tall would have to weigh a minimum 8st 12lb to model.

The average catwalk model, according to estimates, is 5ft 9in tall but weighs just 7st 12lb, giving a BMI of only 16.

The 22-year-old had been told by a model agency she could "make it big" if she lost a significant amount of weight, and for three months she ate nothing but green leaves and drank only Diet Coke.

By the time she traipsed down the catwalk at the Radisson Victoria Plaza in Montevideo, Uruguay, she had stopped eating entirely.

She was cheered and applauded by the fashionistas but collapsed two minutes after she stepped down from the catwalk.

The size-zero epidemic, which started a couple of years ago in Los Angeles, is sweeping across America and redefining the body image 16-to 25-year-olds aspire to.

Size-zero girls weigh not much more than 100lb. Their diet typically consists of an apple for breakfast, a protein bar for lunch and a salad for supper.

Hyper-thin Hollywood stars such as Nicole Richie (daughter of singer Lionel Richie), Lindsay Lohan and Kate Bosworth are followers of the trend.

Steve Bloomfield, spokesman for the Eating Disorders Association, said today: "We do think legislation is needed.

"This is about protecting the young women and men who work in the fashion industry, as well as those who are at risk of an eating disorder and can be influenced by the pictures that they see.

"The fashion industry is there to make money and there is no legislation to protect models. It basically exploits people who are under-weight and forces others to follow suit."

"The fashion industry has completely warped what is considered a normal size and it should be held accountable for that," she said.

"They have had years to get their house in order and they have done absolutely nothing — in fact if anything it has got worse."

If the ban were implemented in London, top models such as Cole, Erin O'Connor, Irina Lazareanu, Vlada, Tanya D and Behati Prinsloo would probably be barred.

The six models are due to fly in this weekend as part of the Marks & Spencer Model Bursary — an initiative set up to bring top models to the capital's shows.

Standing at just under six foot (5ft 11.5in on her model card), O'Connor, the star of M&S's latest high-profile television advert, is unlikely to weigh in at anything near the nine and a half stone needed to give her a BMI of 18 or above — and the same would certainly be true of 17-year-old Cole, who is 5ft 10.5 in tall.

It is suggested some of the most famous models in the world would be banned under a BMI cut-off of 18.

Giselle Bundchen is reported to have a BMI of 16, Kate Moss, according to insiders, has a BMI of about 15 and Eva Herzigova has a BMI of 18.

Last week Madrid City Council, which sponsors the Spanish capital's fashion week, announced a ban on models with a BMI below 18.

However, after discussions with fashion designers, London is refusing to follow Madrid in introducing a ban.

Hilary Riva, chief executive of the British Fashion Council, said today: "We have canvassed the opinions of London Fashion Week designers for the girls they would most like to see on their catwalks and the girls are being selected for the model bursary accordingly.

"The BFC does not comment or interfere in the aesthetic of any designer's show."

Sarah Doukas, founder of Storm, the London agency that employs Cole, hit back at the calls for a ban.

She said: "It is useless to talk about body mass indexes. Who knows what that means apart from your doctor?

"It depends on different body types. Some people have different muscle density.

She added: "I believe that girls should just eat healthily, exercise and just be normal. We just wouldn't use someone who was really under-weight or too thin."

JK Rowling has launched an attack on the "skinny obsessed world" on her website.

She said she did not want her two daughters to grow up to be "empty headed, self-obsessed, emaciated clones".